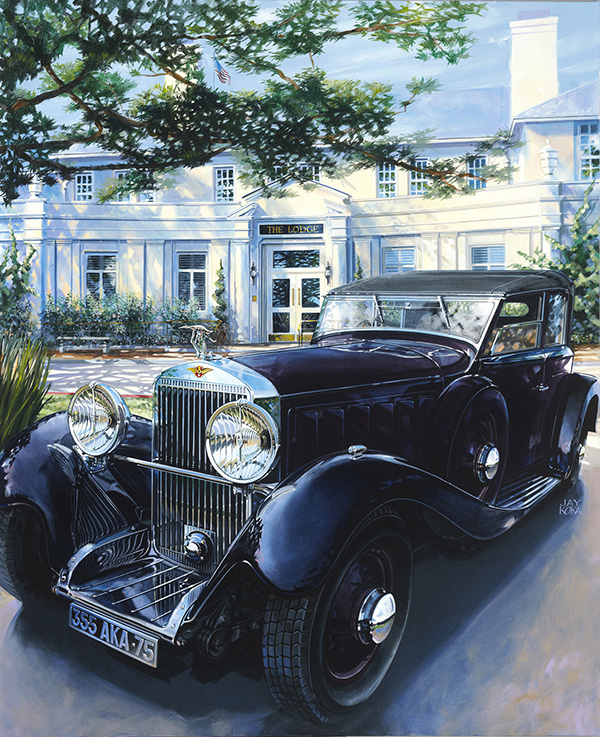 The 2012 Pebble Beach Concours d’Elegance poster painting features William (Chip) E. Connor’s 1936 Hispano-Suiza J12 with body by Saoutchik in a classic pose in front of The Lodge at Pebble Beach.

The car is undergoing a major restoration and was literally in pieces when I started working on the painting. This required much consultation with restorer Brian Hoyt and Chip Connor, the owner. Many details had not yet been finalized as the car was being returned to it’s assumed original production specifications. For example, the fenders where undergoing an extensive rework to an original catalog rendering. So, in a sense, the painting existed before the car.

One of the most challenging aspects of the painting was the color of the car. The fenders are black with a very, very dark cherry body. So dark in fact that under most conditions it looks black. The challenge was to make the body different enough from the fenders so that one could visually understand that it is different...but not very much. The car had not yet been painted when I was working on the painting so I was working from a 4x4” color sample and more or less predicting what it will look like once the sun hits it.

The painting is much more realist in style than I have been painting lately but it contains just enough impressionist colors and techniques to keep me engaged. I believe its subject and style embodies the classic elegance of the Pebble Beach show. 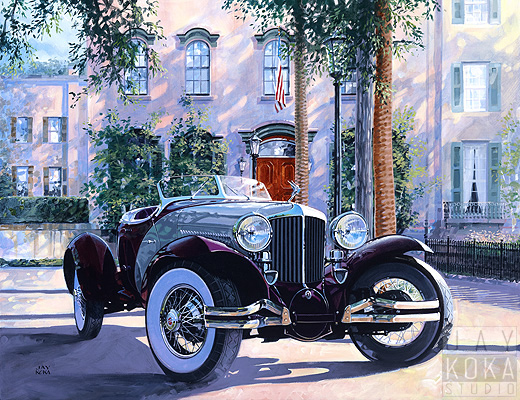 2013 Ferrari Club of America (click to enlarge)
Savannah No5

Jay Koka: I started experimenting with a completely new color palette last year and this painting is a continuing refinement of this experimental approach. The magnificent 1931 Cord L-29 LaGrande Speedster is presented in one of Savannah’s historic squares. This is the 5th in a series of Savannah-based paintings. Sharp-eyed viewers will recoginize the square from the Savannah No1 painting. The contrast in painting style and color palette is quite dramatic."

The Peter Helck Award
The continuing experimentation appears to have paid off: Jay Koka won the coveted Peter Helck Award at the 2012 Automotive Fine Arts Society premiere exhibition at the Pebble Beach Concours d’Elegance. The award, named in honor of the late artist and a founding member, is awarded annually by the Society members for the work that "most represents what automotive fine art should be". 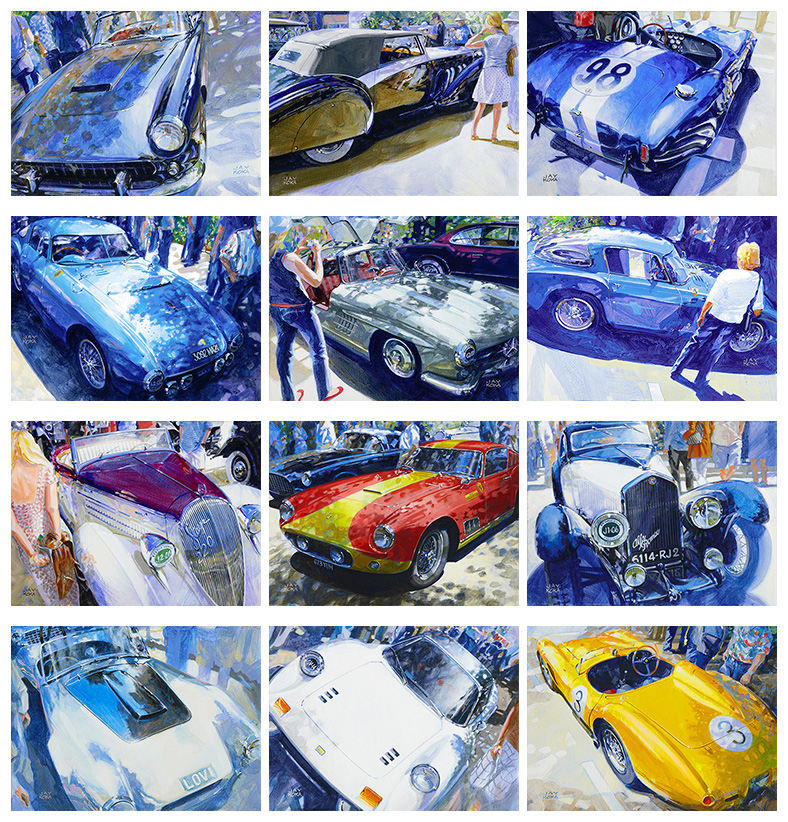 Jay Koka: "Although I've attended the Pebble Beach Concours d'Elegance® for over twenty years, I generally arrive late Thursday and miss the Pebble Beach Tour d'Elegance™ which is always just wrapping up as we arrive in Carmel. I needed to be there a day earlier in 2012 as part of my poster artist duties and so had the opportunity to see the "Tour" both in action and on display on Ocean Avenue in downtown Carmel.

And I'm sure glad I did... the few hours I spent among the cars on display resulted in an exciting series of paintings. Each painting is a 16x12" acrylic on canvas and is executed in a very loose, impressionist style with bold use of color."

The paintings premiered as a group of 12 at the 2013 AFAS Exhibition at the Pebble Beach Concours. 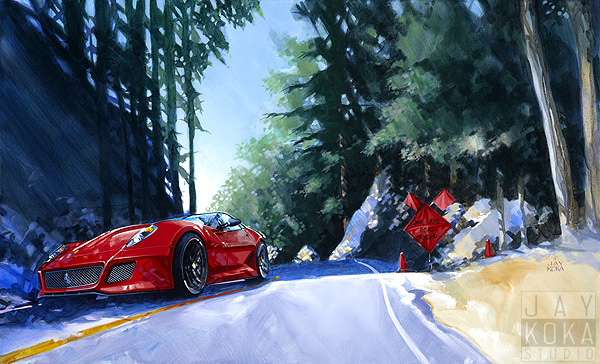 This painting of a Ferrari 599GTO at speed was inspired by an early morning drive down Highway 1 south of Big Sur. A friend was driving so I had the opportunity to concentrate on the view.

I found the dodging in and out of intense light and dark quite mesmorizing. The painting captures the 599 breaking into one of these pools of light. 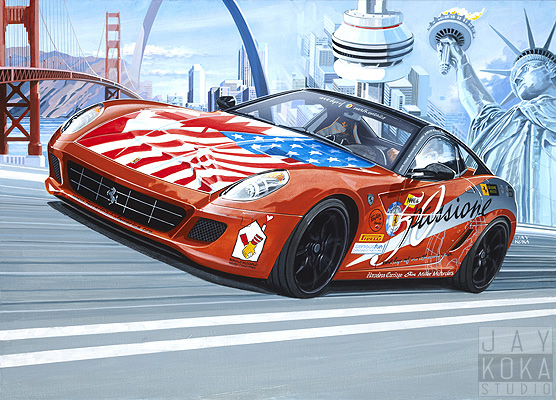 One Lap of North America is a year long celebration of the 50th anniversary of the Ferrari Club of America...founded in 1962 and Incorporated in 1963.

In a specially prepared and identified 599 FCA members will carry a symbolic baton visiting 50 major population centers around the continent. The “baton" will touch... every FCA region and chapter... every Ferrari dealer in the U.S. and Canada and as many other Ferrari-related events as possible.

The Relay route starts at Concorso Italiano on August 17, 2012 and continues to the FCA 2012 Annual Meet in Palm Springs, October 10-14, 2012. It will ultimately visit the home city of every region and chapter in the Club and will end with the FCA 2013 Annual Meet in August at Road America.

Jay Koka was commissioned to create a painting featuring the 599 in its full livery with a vignette background representing the west coast... midwest... Canada and the east coast to represent the continental scope of the event. A poster featuring Koka’s original painting is being produced and distributed to members of the FCA. The Studio does NOT have posters for sale. 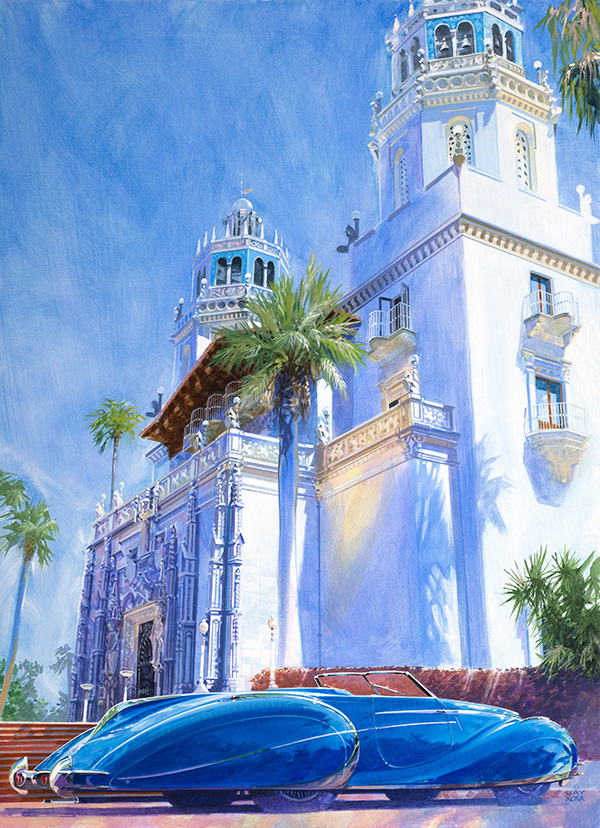 THIS PAINTING HAS BEEN STOLEN

Jay Koka: I started experimenting with a completely new color palette last year and this painting is a continuing refinement of this experimental approach or maybe even its ultimate expression. I would not be unhappy. The Delahaye 175M is presented at the entry area to the Hearst Castle. Note that there are some significant artistic liberties here as it would not be possible for a vehicle to be located in this position.