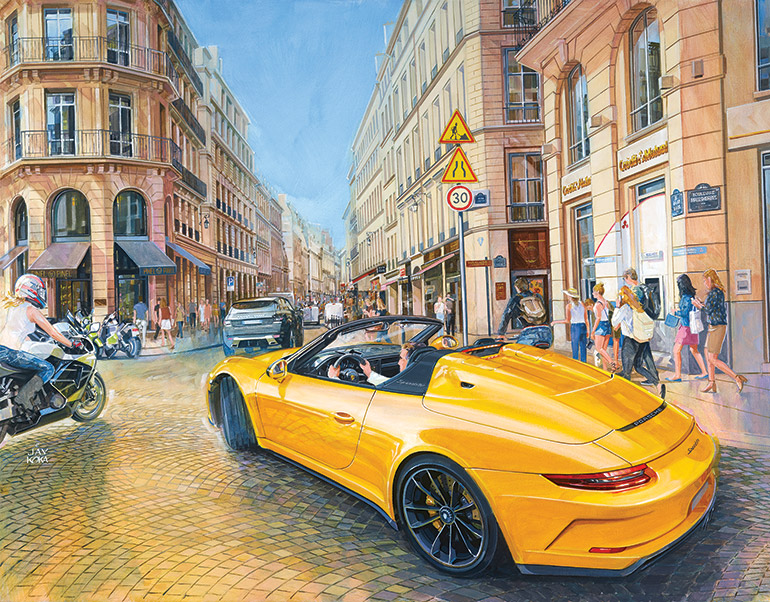 Koka: I don’t think there is a 90 degree intersection in the heart of Paris. Most, like the one depicted, are three, four and five or more streets intersecting at every conceivable angle. We came across this intersection on our way to the Fedex office near the Champes d’Elysse. So here is Boulevard Malesherbes and Rue Boisy d’Anglais the street onto which the Porsche is turning. There’s actually another street, barely visible behind the bank called Rue de Serene.

Why this intersection? No particular reason other than it’s attractive, it was completely empty (early February) and I like painting a setting in which I have actually been. I find it easier to capture the feel of the place. I should note that the painting depicts a spring/summer scene because I think that depicting a bunch of people in overcoats wouldn’t be much fun…

Contemplating a vehicle for the painting: the new Porsche 911 Speedster was recently announced and I’m a Porsche fan… easy decision.

The 44x34" (110x85cm) acrylic on canvas is a major new work scheduled to premier at the RetroMobile Show in Paris in February 2020.

A full size canvas reproduction edition is planned for 2020. 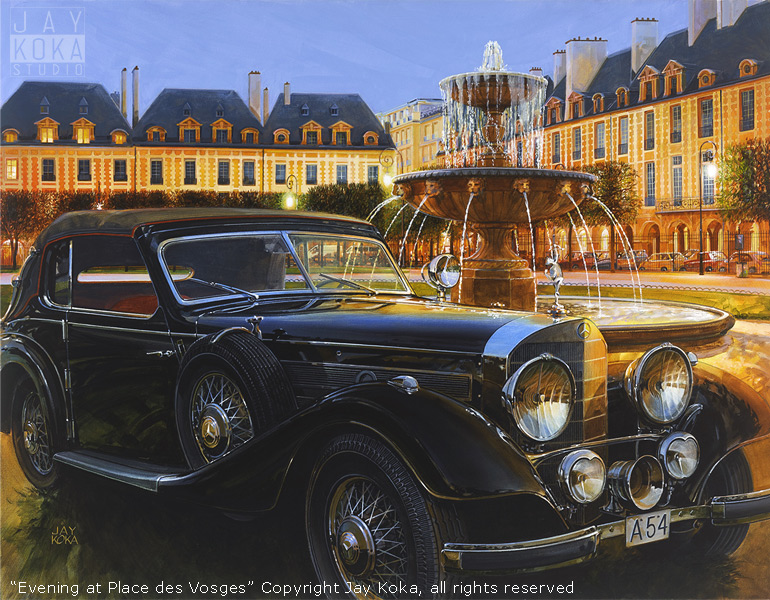 Koka: Our annual February trip to participate in the Retromobile Show in Paris with our ArtistAuto colleagues has provided an endless series of locations for new works. It's no secret that historic Paris is a wonderful city, most certainly one of the most beautiful in the world. This has presented many settings for equally historic or "significant" vehicles. My work has become as known for this attention to the setting, mood and background as much as the vehicle featured in the painting. Sometimes internationally recognized sites like the Eiffel Tower in Pres de Champ de Mars and the turning circle in Place de la Concorde are featured in my work.

Place des Vosges is perhaps a little less known outside Paris but is no less a magical setting for the 1938 Mercedes-Benz 540K.

The 44x34" (110x85cm) acrylic on canvas is a major new work scheduled to premier at the RetroMobile Show in Paris in February 2021.

A full size canvas reproduction edition is planned for 2021. 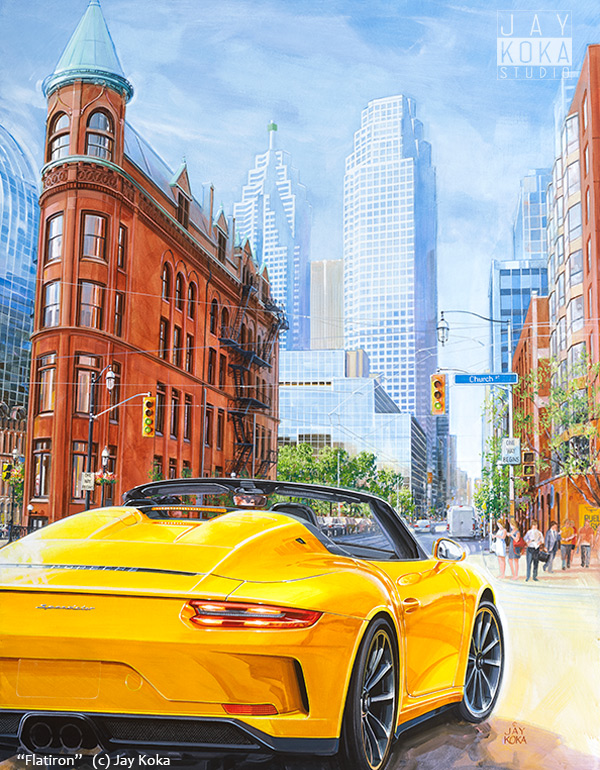 Located in downtown Toronto at 49 Wellington Street East, the building is the Gooderham Building or more commonly known as the "Flatiron Building". It is situated on a triangular parcel of land in Toronto's St. Lawrence Market District. The five-storey building was commissioned by George Gooderham and assumes a wedge-like shape and was constructed in 1891 to the designs of architect David Roberts Jr.

It is situated in one of Toronto's most vibrant and historically significant neighbourhoods. The building, which is arguably Toronto's most photographed historic structure, is also located only a few blocks from other celebrated heritage sites such as the St. Lawrence Market and the St. James Cathedral.

Contemplating a vehicle for the painting: the new Porsche 911 Speedster was recently announced and I’m a Porsche fan… so an easy decision. 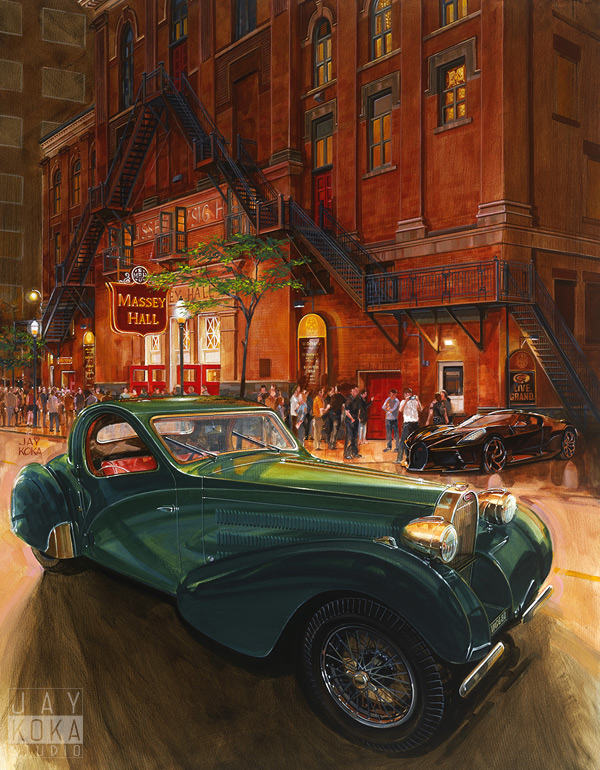 The Canadian International AutoShow with the Cobble Beach Concours d'Elegance has launched a feature of the 2020 AutoShow called "The Disruptors 2020" in which unique vehicles that have impacted the development of the automobile are presented.

The 2020 event art features the 1934 Bugatti Type 57 Atalante from the Stahl Automotive Foundation and the Bugatti "La Voiture Noir". The background is the iconic Massey Hall in downtown Toronto. 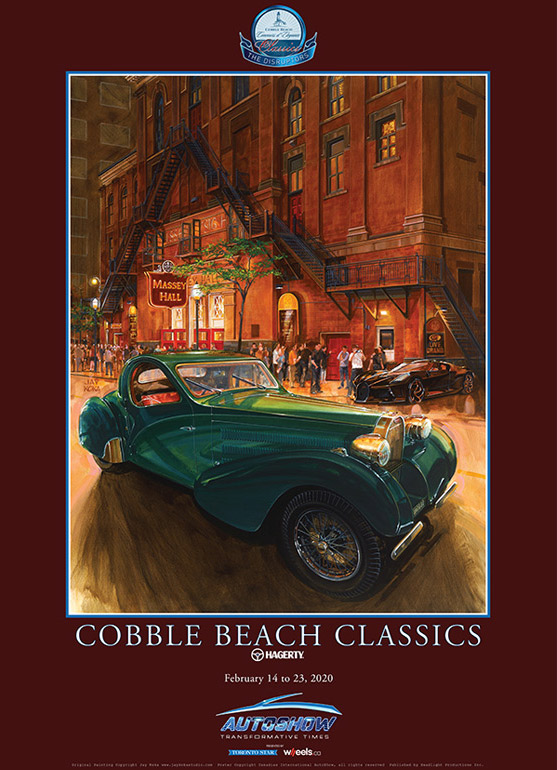 The art has been published as a fine quality poster available from the AutoShow at the event February 14 thru 23rd, 2020 at the Metro Toronto Convention Centre www.autoshow.ca contact the show for further information.

The poster is not available from the Studio. 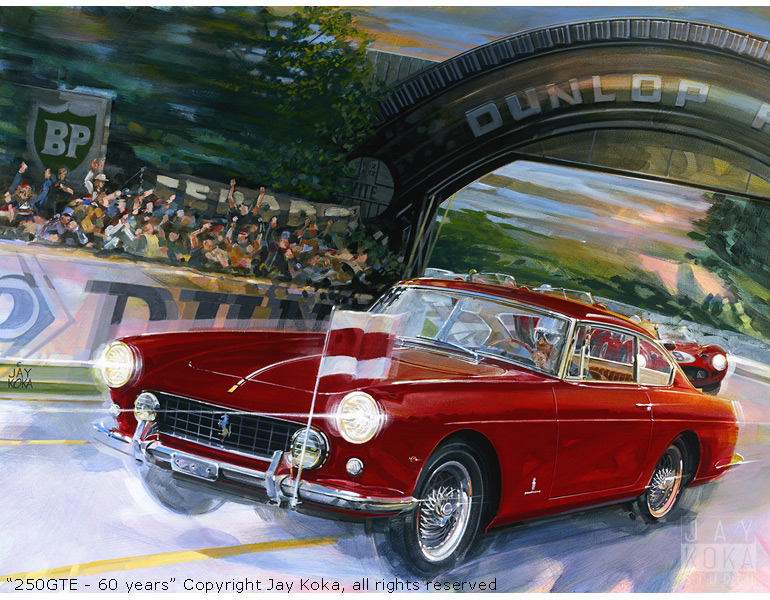 The 1960 running of LeMans saw the debut of the 250GTE as the pace car for the race. This pace car is unique with significant features like no side vents behind the front wheel wells among others versus the production car.
The car is depicted at speed having just passed below the iconic Dunlop bridge.

The art is being used to mark the 60th anniversary of the car at the Ferrari Club of America Penn-Jersey Region event in mid-May 2020 in Skippack PA.

The art is released in a full-size canvas edition of 20 signed/numbered prints. 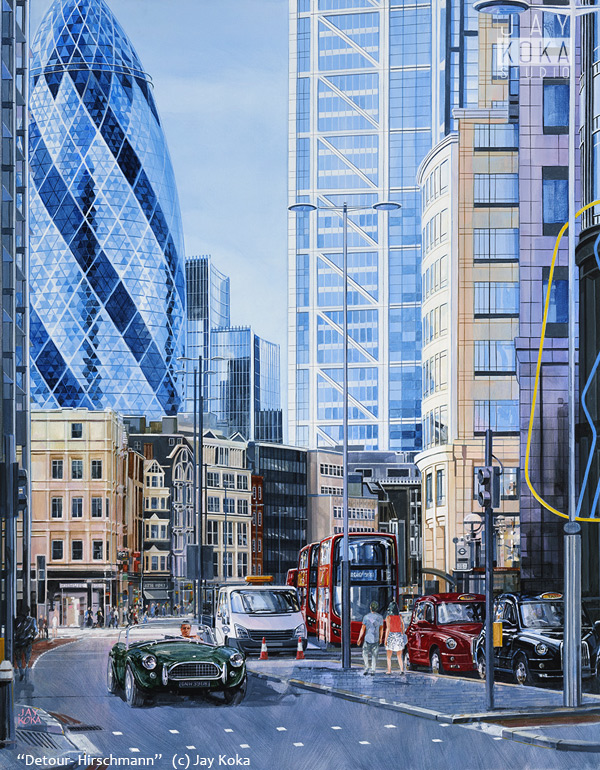 A privately commissioned major new work featuring the heart of London and the client's 1964 Shelby Cobra. The car is obviously on the wrong side of the road as it "Detours" to avoid a construction backup. The painting features some iconic London features like the "Gherkin", double-decker buses and the ubiquitous London cabs.